I have been there many many times with tourists as a guide. Almost all the tourists like there and some says they even want one. I definitely recommend.
Michelin, one of the famous guidebook followed me that they ranked two star in this samurai house.
An American gardening magazine ranked Nomura’s garden was top 3 ranked Japanese garden in Japan.

Traditional fusuma – papered sliding door with masterfully landscape are painted.
Ranma – curving work above paper sliding door.
Japanese alter – decorated with gold leaf.
Calligraphy – even Japanese people cannot read since they are too artificial.
Even nail hider, door nob or old coins is interesting.
And they have a sord museum where you can see calligraphy drawn by samurai.

Joudan no ma is a room for the lord. This room was used only when the lord come to this house. Ekken-no-ma is a waiting literally means audience. 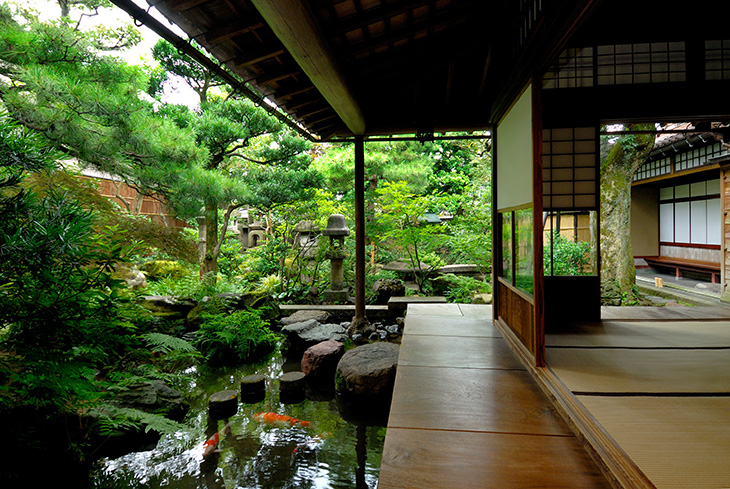 The garden itself is not big, however just enough size to make you feel to want one.
A beautiful pond in which colorful cape swim, small waterfall, stone lanterns that placed next to waterfall and big trees covered gardens. Everything is beautiful.

You can enjoy Japanese green tea (matcha) in the 2nd floor. To respect nature, the tea room is very small. They don’t do a formal tea ceremony, they serve tea as ceremony style however. Enjoy the tea from 2nd floor and seeing down the garden are an amazing experience. You might think you want to live there.

There are two sweat shops next to Nomura house. They sell local sweats. and they have samples for free.