In Knazawa, there are vegetables called “Kaga yasai”, that literally means “vegetables of Kaga”. They are grown Kaga region – Kanazawa and southern part of Ishikawa prefecture. They are commonly eaten by Kanazawa local people and you can find them in Omicho market. Some local restaurants offer dishes with local vegetables. END_OF_DOCUMENT_TOKEN_TO_BE_REPLACED

You will see something like decoration on trees if you come to Kanazawa in winter. That is called Yukitsuri.
It is an actually not decoration but protection from snow.
Snow in Kanazawa is very heavy and contains a large quantity of moisture. When it snows, the snow breaks branches. In order to protect tree’s branches from heavy snow, protection is made especially on evergreen trees such as pine trees. END_OF_DOCUMENT_TOKEN_TO_BE_REPLACED

Omicho is a market that sells everything you have in the kitchen, their fishes are the finest since Kanazawa is facing sea of Japan.
In Omicho, there are lots of sushi and sashimi restaurants. END_OF_DOCUMENT_TOKEN_TO_BE_REPLACED

Geisha districts have been restaurants districts since 1820 and still there are many restaurants in Higashi chayagai district and Kazuemachi. These are mostly expensive, so Jiyu-ken will be a only choise if you are a budget traveller. END_OF_DOCUMENT_TOKEN_TO_BE_REPLACED

There are 10-20 restaurants near Kenroku-en. They are located in the one-way street between Kenroku-en and Kanazawa castle. 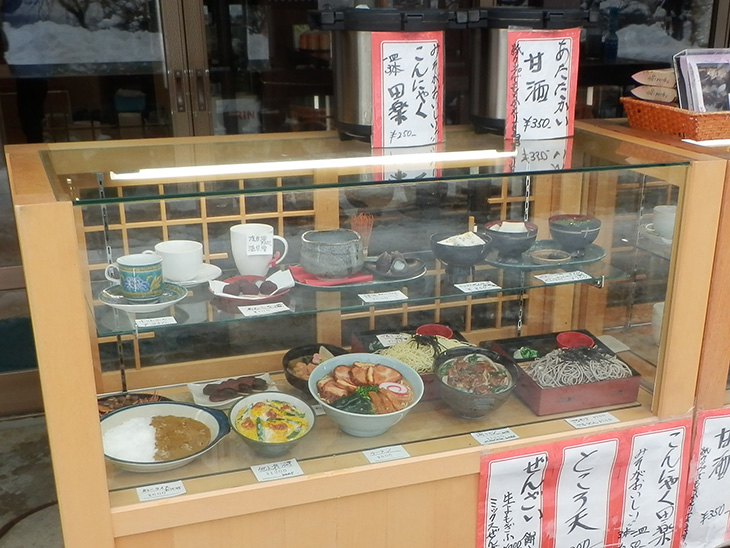 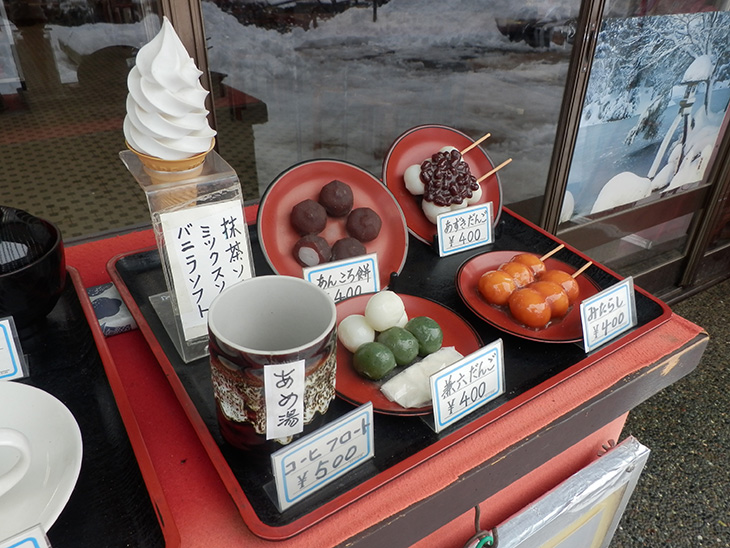 The restaurants have food samples made of plastic in front of them like the picture above. As you will see, all restaurants offer almost same menu. And the prices are almost the same.
The restaurants have souvenir shops, however they don’t give you a pressure to buy anything. They sell Kanazawa’s special souvenir though.
Price is mainly around 600-1,500 yen. 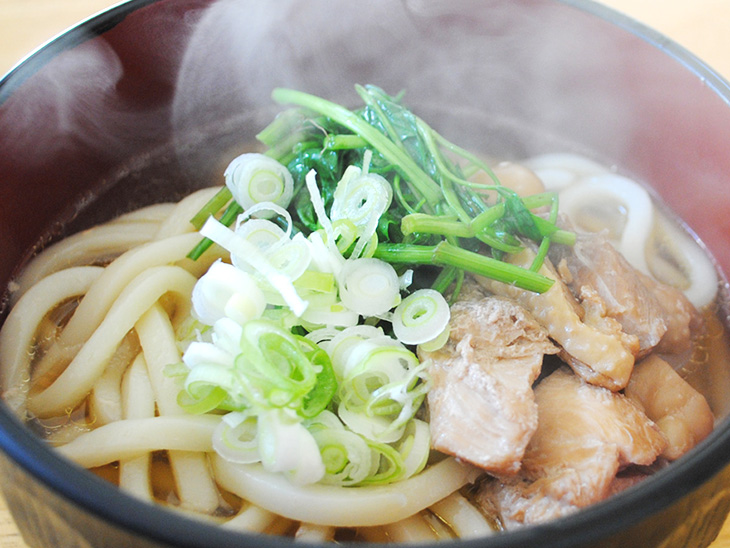 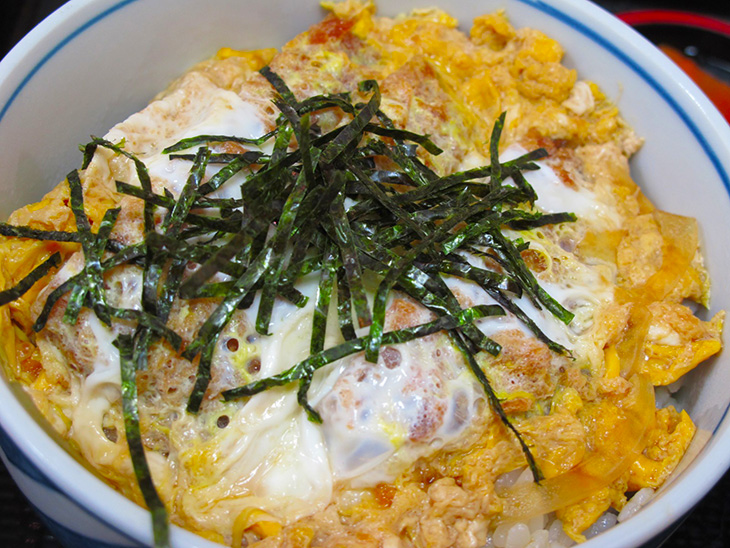 All the restaurants around Kenroku-en are Japanese style – noodles, rice with meat or eggs but not sushi. Some restaurants have English menus, but you may not be able to understand what the foods are without tasting them.

In Kenroku-en, there are several tea shops, they are not cheap as the restaurants out of Kenrokuen. In the garden, you can enjoy the foods with seeing a beautiful garden. 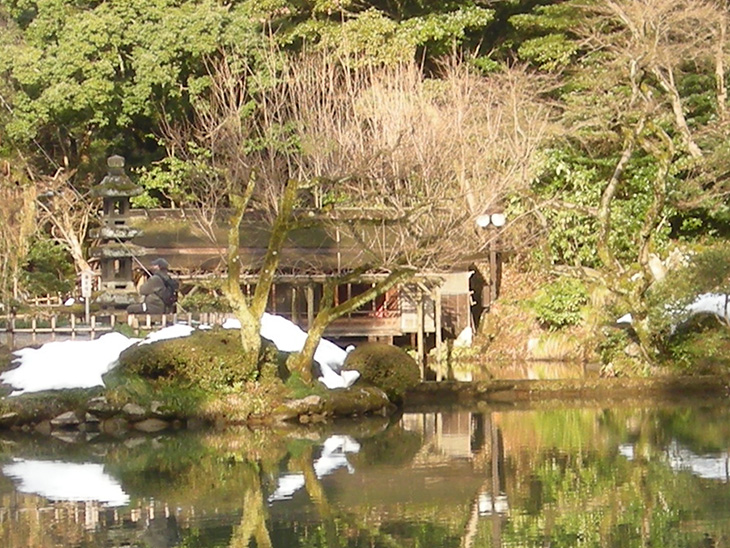 Miyoshian is a restaurant in Kenrokuen garden. The restaurant opened in 1875, one year after Kenrokuen was open to Kanazawa’s citizen.
You will feel like as if you are in nature because the restaurant is floating on a pond and facing to a beautiful waterfall.

Kanazawa is a traditional city and famous for Kimono – Japanese traditional dresses. Nowadays, Japanese people wear Kimono on only special occasions – New year, wedding, or tea ceremony. However, some places still offer Kimono wearing experiences. Of course, you can take a picture. In some places, you can rent it and stroll around Kanazawa with Kimno. 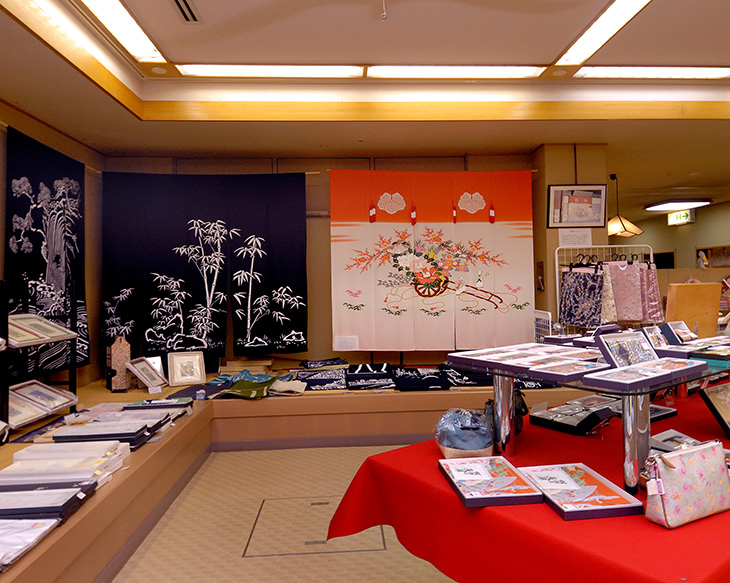 They have a Kimono museum, so you can learn how to make kimono.
Also, you can experience kimono drawing. 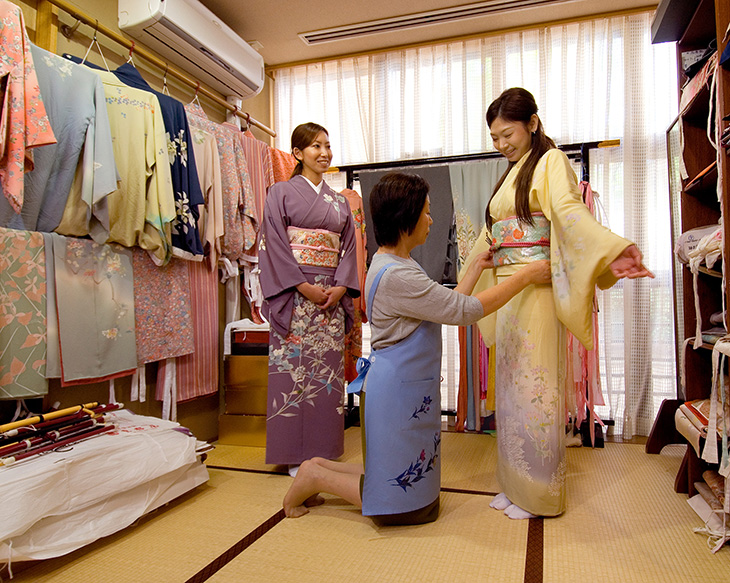 Kuraha is one of the very old kimono shop.
They also have Japanese bags, shoes and some goods to walk around.
(Booking in advance ins necessary)

They are located in Higashiyama geisha district.
By bus, take a Kanazawa loop bus (clockwise) from east terminal of Kanazawa station and get off at Hashiba-cho (RL5).
Walk back and turn to the right at the second corner.
From counterclockwise bus stop (LL11), walk into the street you can find across the street on the right side.
Walking 1 minute and then you will come into Higashi chaya geisha district. Hakuza is on the right side. 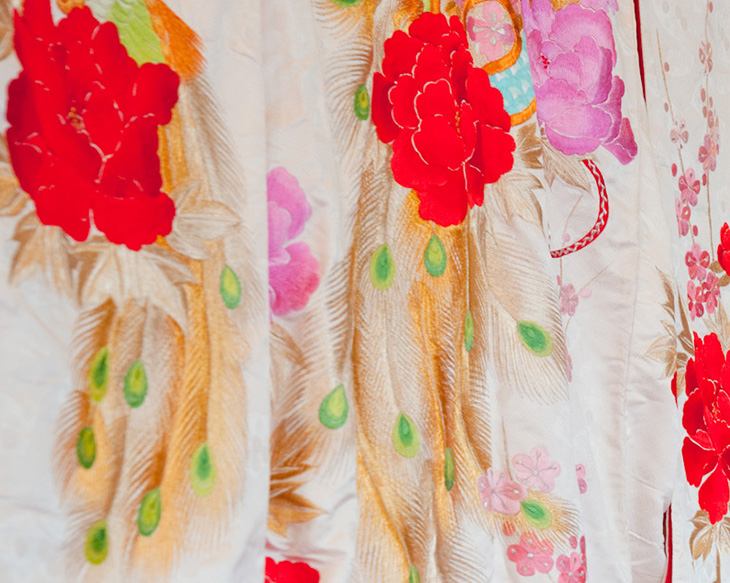 They have huge renge of kimono – both casual and formal. Also they have Kimono for men.They have some services – just walking around the city, taking a picture in samurai district and making a DVD or one-day-tour with Kimono.
And they speak English.Rent kimono a day is aveilable in Nagamachi Yuzenkan.
They also have Kimono exhibition room and even they offer painting experience. 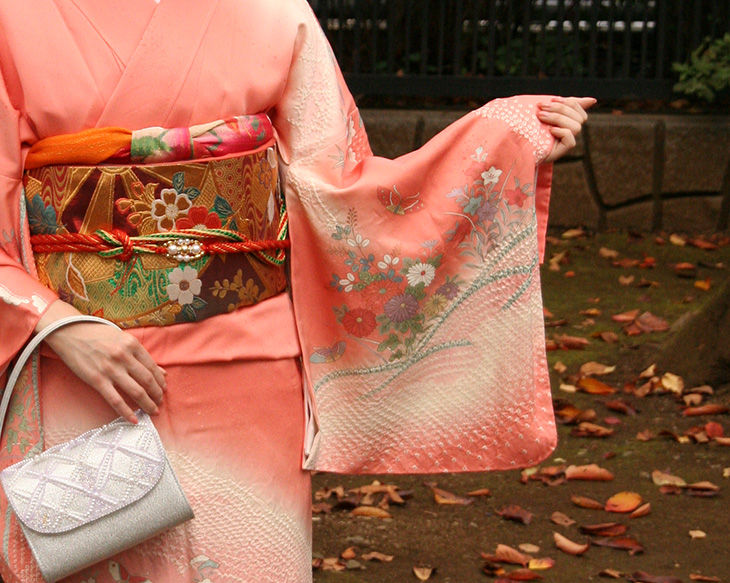 They have huge renge of kimono – both casual and formal. Also they have Kimono for men.They have some services – just walking around the city, taking a picture in samurai district and making a DVD or one-day-tour with Kimono.
And they speak English.

Geisha house shima was built in 1820 when geisha other houses were moved to Higashi chaya-gai under the control of lord Maeda who governed Kanazawa during that time.
Shima was the one of the oldest building and they open to the public. END_OF_DOCUMENT_TOKEN_TO_BE_REPLACED

Trip to Shirakawa-go and Takayama

If you have two or three days, it is worth going to Takayama and Shirakawa-go.
Shirakawa-go is a small village that have unique houses and the village is listed on World Heritage Site.
Takayama is a town that has lots of offer – old town houses, lots of museums and sake brewery. END_OF_DOCUMENT_TOKEN_TO_BE_REPLACED

Half a day itinerary

END_OF_DOCUMENT_TOKEN_TO_BE_REPLACED

How to get to Kanazawa

On 14th March 2015, Shinkansen, a high speed train connects Tokyo and Kanazawa and access will be dramatically changed.
It takes 4 hours now but it will take only 2.5 hours. Kanazawa will be one of the accessible and nice tourist destination. END_OF_DOCUMENT_TOKEN_TO_BE_REPLACED

Kanazawa castle was owned Maeda family who governed Kanazawa during feudal samurai period. The castle was burnt several times, so the oldest parts, Ishikawa-mon gate, were built in 1788 and rest of them are new.
After samurai period was finished in the end of 19th century, the government began to use the castle as a military basement. The basement had been in the castle until the end of the world war the second. After the war, Kanazawa university was built in the castle. The castle had been the canvas until the Kanazawa university moved to the suburb of Kanazawa in 1995. After the university moved, Ishikawa prefectural government began to restore the castle.
Nowadays, the castle is open to the public and the local government is still restoring the castle. END_OF_DOCUMENT_TOKEN_TO_BE_REPLACED

Kanazawa, which literally means “stream of gold”, is a city of gold leaf. 99% gold leaf and 100% silver leaf used in Japan is made in Kanazawa.
Gold leaf is mainly sticked on Japanese Buddhist altar and craft arts. Also one of the remarkable temple, Kinkakuji in Kyoto with having a golden pavilion – whose wall are made of gold leaf in Kanazawa.
Sakuda is a gold leaf souvenir shop as well as a factory that produce gold leaf. They show how to make 1/10, 000mm gold leaf. END_OF_DOCUMENT_TOKEN_TO_BE_REPLACED

There are regular lots of buses in Kanazawa and understanding all of them are hard, however the bus lines going to tourists attractions are limited so easy to understand. The buses are operated by Hokutestu-bus and run frequently.

There are two big bus terminals in east and west exit in Kanazawa station. All the buses go to tourist attractions depart from east terminal and the bus stops are within ten stops from Kanazawa station. END_OF_DOCUMENT_TOKEN_TO_BE_REPLACED

Kanazawa has three geisha districts and Kazuemachi is the least touristic and smallest one. Least touristic doesn’t mean “not worth”. Sometimes you can find even better things in less-know place.
Since the district is located between Omicho or Kanazawa castle and Higashi-chaya-gai, access is good. END_OF_DOCUMENT_TOKEN_TO_BE_REPLACED

Higashi chaya gai is a former geisha district.
In modern word, this district was a restaurants area. Chaya is a tea house or restaurant and gai is a district. Higashi means east. END_OF_DOCUMENT_TOKEN_TO_BE_REPLACED

Get around Kanazawa by loop bus

Kanazawa is not too big city and easy to look around.
All tourist attraction is within 3km from Kanazawa station.
There is no train in the city but bus covers all touristic places. END_OF_DOCUMENT_TOKEN_TO_BE_REPLACED

Even if you have only one day in Kanazawa, you still can visit most touristic places.

END_OF_DOCUMENT_TOKEN_TO_BE_REPLACED

Omicho is a Kanazawa’s local market. Kanazawa’s people call them “Kanazawa’s kitchen”. As the words saying, they sell everything you can find in your kitchen. Not only fish but also vegetables and meats are sold in Omicho market.

Since they are not morning market, you can visit there anytime but you had better to visit there by 4pm since the most shops close around 5pm. Conversely, you can buy foods at discount price after 4pm. In weekend more than half shop closed, their target are mainly tourists. END_OF_DOCUMENT_TOKEN_TO_BE_REPLACED

Make your chopsticks with gold leaf

Kanazawa literally means stream of gold. In old days in Kanazawa, there was a man called “Imohori Tougoro”. He found golf fust when he cleaned sweet potato. This is why we call the city “Kanazawa”. We don’t have gold mines, still 99% of gold leaf used in Japan is made in Kanazawa. Kinkakuji in Kyoto, known as golden pavilion, its wall’s gold is from Kanazawa.

In Kanazawa, you can buy lots of golden crafts. Not only buying, you can even make your own crafts – e.g. chopsticks or jewelry box with gold leaf.
When it comes to gold, you will think something expensive. However, handmade gold leaf is an affordable price. You never be able to experience making your crafts with gold leaf in any other place on the planet out of Kanazawa.

Kanazawa shinise kinenkan is a museum that displays merchant’s cultural stuff used around 100 years ago. The building was built in 1878 and was a pharmacy.
Shinise means a family of pedigree doing same business for long years and kinenkan means museum.
The entrance fee is only 100yen. This is very in expensive as a Japanese museum – normally you have to pay 500yen or more. Still the exhibition is really nice and worth visiting. END_OF_DOCUMENT_TOKEN_TO_BE_REPLACED

I have been there many many times with tourists as a guide. Almost all the tourists like there and some says they even want one. I definitely recommend.
Michelin, one of the famous guidebook followed me that they ranked two star in this samurai house.
An American gardening magazine ranked Nomura’s garden was top 3 ranked Japanese garden in Japan. END_OF_DOCUMENT_TOKEN_TO_BE_REPLACED

Kanazawa was governed by Maeda family during federal samurai period. The family controlled Kanazawa since 1583 when the first lord Toshiie Maeda came to Kanazawa. During samurai period, Maeda family had a strong power and Kanazawa was a forth biggest city after Tokyo (formerly called Edo), Osaka Kyoto and Nagoya. So lots of samurai are living in Kanazawa.
Naga-machi is the area where mid-classed samurai lived, meanwhile two chief retainers live in the same area though. END_OF_DOCUMENT_TOKEN_TO_BE_REPLACED

21st Century Museum of Contemporary Art, Kanazawa is a contemporary art museum located next to Kenroku-en and Kanazawa castle. Their exhibitions are not only from Kanazawa but also all over Japan and all over the world.
If you like contemporary art, you should not miss it, but you should be aware that you might want to stay whole a day in the museum. Planning your itinerary in advance is recommended.
Their exhibition is not free, however they have admission free zone. END_OF_DOCUMENT_TOKEN_TO_BE_REPLACED